The QA Portal currently has pre-loaded testing protocols for the following four phantoms:

These programs are designed to meet or exceed the QA testing requirements of three main organizations responsible for setting Ultrasound Quality Assurance testing standards in the United States:   the ACR1, the AIUM2,3 and the AAPM4.   The default protocols all contain phantom-specific test procedures, grouped into three different test lineups.   These lineups are named using terminology borrowed from the ACR Ultrasound Accreditation Program.

Which test procedures are included in each lineup was determined after a careful review of the requirements of the ACR, AAPM and AIUM.   It should be noted, though, that the default QA Protocol exceeds many of these requirements, and choses to implement them in a way that is not appropriate for your institution.   For that reason, all users should review the summary table below and edit the default Procedures and Lineups to match their internal requirements.   Note that one test lineup must be designated as the “Baseline” test lineup and sets reference values for determining pass/fail conditions in many tests.   The Acceptance Testing lineup is set as the baseline lineup in the default protocols.   Users that do not wish to perform acceptance testing (it is optional according to the ACR Ultrasound Accreditation program) will need to set another lineup as the baseline test.   See Editing the Default Test Protocols within the Instructions for Use for more information on how to edit protocols.

Step 1: Create Inventory of Equipment to be Tested Back to Top

To get started with the QA portal, you must first create an inventory of the ultrasound scanners and transducers to be tested.5   Note that machines and transducers are tracked separately in the QA Portal, as transducers often move from one scanner to another.   To create your inventory, go to the Equipment tab on the Portal menu

Step 2: Editing the Default Test Protocols Back to Top

Many users may wish to edit the default protocols as most appropriate for their institution. To do so, select Tests on the Portal menu.

The Tests page has two separate tabs, defined below:

Lineups – collections of tests conducted at a set frequency

To modify the pre-loaded recommendations in the 40GSE QA Test Protocol, edit or delete the each of the Test Lineups associated with the Protocol.

To edit a Lineup, select the icon to the left of the Lineup name. A new screen will open with an Edit menu to the left and a list of Tests to the right.

The following setup information may be changed in the Edit menu:

Test Lineups may be deleted by selecting the icon to the right of the Lineup. Users may choose to do this if, for instance, they will only conduct QA testing annually. In this case, the semi-annual tests could be deleted.

To Create a new Protocol, choose Other from the list of Protocol Types. A prompt will open asking you to name this protocol. Additional Lineups can be associated to this protocol by creating new Lineups from the Lineups tab. The new protocol will be listed in the Protocol Type field.

Procedures may be created, edited or deleted using the , and icons from the Procedures tab. Basic information about the Procedure is edited in the menu to the left.

Basic information about the Procedure is edited in the menu to the left, which has the following fields:

The section to the right has two tabs for associating Test Values and Lineups to a procedure.

Five data types are supported in the Test Values tab:

Once you have completed testing, the Reports page provides convenient summary data for your testing program, and can be accessed by clicking on the Reports tab on the QA Portal Menu. The available reports include:

Step 5: Managing Your Testing Program Back to Top

Once you have set up your testing program, you will return to the QA Portal Equipment page each time you log onto the portal.   The Equipment page lists equipment in the order of which has the soonest test upcoming.   To start entering data for one of these tests, click on the test protocol name.

You may also review data from completed tests by selecting the Completed Tests icon .

The designated baseline lineup is always listed prior to upcoming tests.   Baseline test data provides the benchmark against which all future tests are conducted, and this test should be repeated any time a machine or transducer is repaired, or any time a new phantom is purchased or repaired, as these changes may affect the outcome of future QA measurements.

To repeat Acceptance Testing, you will first need to deactivate the ultrasound machine or transducer that was sent out for repair.   This is done by first clicking on the machine / transducer name in the equipment list to enter the edit screen shown below.   From this screen, select “Deactivate” located at the top right of the edit form: 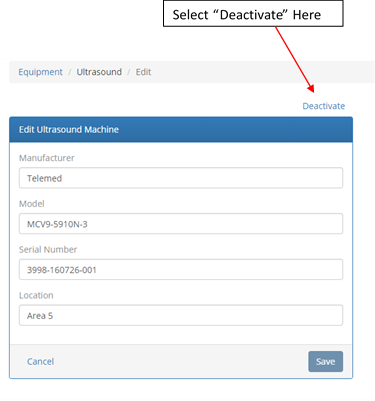 A deactivated machine (or transducer) is not deleted from the equipment list.   Instead, it is placed at the bottom of the list so that may be re-activated if it is returned to service.   Upon re-activation, users should repeat Acceptance Testing (or a similar designated baseline lineup).